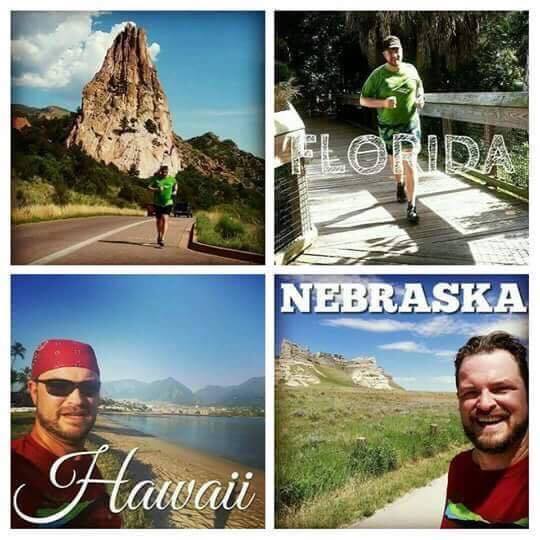 51 Lefts Make a Right - Running In The USA

In 2015, overweight, single marathoner and perennial Emergency Room klutz, Derek Zardus decided to run 50 marathon routes in 50 states in 50 weeks in the USA in 2016.

Come hear how he conceived and planned the adventure, how the trip evolved along the way, and lessons learned from the endeavor.

Place bets on whether or not he completed his goals. Bring ripe but not overripe fruit to display your pleasure or lack thereof with his storytelling abilities.

This will be an hour long presentation with questions and answers afterwards. Probably more questions than answers.

Derek Zardus – Chief Running Officer
Derek’s mantra on the road is the running equivalent of Carolina Pulled Pork – Low and Slow. He believes we can run and improve ourselves without destroying the machinery that propels us forward.

Downshifting on general runs by running and walking allows us to run more regularly and more consistently without the common maladies that plague many runners: shin spints, plantar faceitious, Ilio Tibial Band Syndrome, etc. Derek started running consistently about six years ago and suffered from a wide variety of those common problems until recovery from a herniated disc led him to commit to consistent run/walk strategies.

After that, he completed 3 official marathons (Burlington VT, Bay of Fundy International, and Newport RI), paced a friend as race support for the Sugarloaf ME marathon, and completed 7 other marathon distances in 2015 as training for his 2016 goal of running 50 classic marathon routes in 50 states in 50 weeks, now completed.

Derek has also paced a variety of half marathons with Beast Pacing starting in March of 2015. He is a current ambassador for Spandits running gear and The Dirt Gang running organization.

19:00 --- Doors open! Socialise, meet some new friends and enjoy yourself!

Looking forward to seeing you there with us at Ceainaria 5!