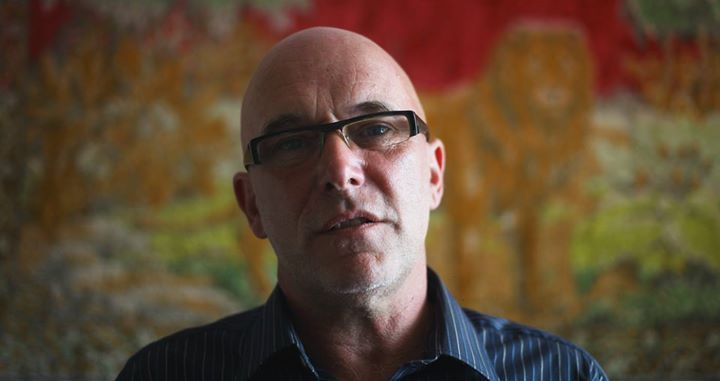 He is co-founder of Carib Gems and Pressure Sounds, and founder of Hitrun Records as well as Green Tea Records and Soundboy Records. His most well-known label is On-U Sound.

Born in London in 1958 (on a cusp between Capricorn and Aquarius), Adrian Maxwell Sherwood showed a precocious talent for music. Spending many nights away from home - next to a Mars Bar factory in Slough, Buckinghamshire - he worked initially with now nostalgic names like Emperor Rosko, Judge Dread, Johnny Walker and Steve Barnard. Early contact with reggae world was through work for the Pama and Trojan roadshows, and school vacations were spent working for the legendary Pama and Vulcan labels.

At the ludicrously early age of seventeen, he co-founded the Carib Gems record label showing ommendable foresight by issuing the first Black Uhuru sides, not to mention some fine early dub work by Prince Far I. Far I was to become a regular colleague of Adrian's until his tragic death in Jamaica in 1983. He also licensed Ms. Pottinger's famous High-Note label in England on Skynote.

As a producer, he cut his teeth on the fine Dub From Creation set (re-issued on On-U Sound in 2004) from Creation Rebel issued on Hitrun Records, Adrian's next label formed in 1978. The label issued a total of 34 twelve inch singles; classics including Carol Kalphat's African Land (with Eastwood & Dr. Pablo) and Prince Far I's Higher Field Marshall. Hitrun also issued the first Roots Radics dub set Dub to Africa and the first chapter of the renowned Crytuff Dub Encounter by Prince Far I & The Arabs, mixed and co-produced by Sherwood.

It was in New York that Sherwood recruited guitarist Skip McDonald, bassist Doug Wimbish and drummer Keith LeBlanc, together the onetime house band at the famed rap label Sugarhill Records, and under a variety of names (most commonly Tackhead) the trio brought new power and definition to the company's densely-textured recordings.

By the mid-1980s, Sherwood was among the most visible producers and remixers in all of contemporary music, working on tracks for artists as varied as Depeche Mode, Einsturzende Neubauten, Simply Red, The Woodentops and Ministry. He became increasingly involved in industrial music as the decade wore on, producing tracks for Cabaret Voltaire, Skinny Puppy, KMFDM and Nine Inch Nails, and although On-U Sound continued to reflect its leader's eclectic tastes the label remained a top reggae outlet.

On-U Sound helped breaking down the barriers between reggae music and the english independent music, punk and new wave. You can find Adrian's unique touch on the mixer on albums by African Head Charge, Creation Rebel, Dub Syndicate, Mark Stewart, Little Axe, New Age Steppers, Bim Sherman and many others.

During the 90's the label slowed down its activity, even though keeping its cult status with a thick program of reprints on cd of its catalogue. In the meantime Adrian collaborated with various artists in various and different music scenes, producing and remixing people such as Sinead O' Connor, Primal Scream, Air, Asian Dub Foundation. Other projects got him involved with new labels such as Green Tea and Pressure Sounds.

Among his masterpieces produced in the 90's, you will find the experimental albums of two great Jamaican music legends: Bim Sherman (Miracle - Mantra records 1996) and Junior Delgado (Reasons - Big Cat 1999). Two extremely intense and refined masterpieces that show a particular conception of the world music.

Adrian's natural attitude to stir up the sounds from different cultures with sensitiveness and taste, has attracted the attention of Peter Gabriel's Real World Records, who commissioned him his first real solo album. The release of Never Trust a Hippy? in 2003 has brought a new reputation and international visibility to Adrian Sherwood.

His debut album coincides with a new activity of Adrian's 'dub live show', which has seen him in action in the main international clubs and stages: a show which consists of a real time remixing of a selection of music tracks, with the aid of a 24 channels mixer and with the support of the Jamaican singer Ghetto Priest plus eventual guests.

2003 has been the year of the On-U Sound, rebirth: a new organization, a new studio and a really rich program of new productions. The compilation Chainstore Massacre has been the first sampler of the label new style, followed by the Ghetto Priest's debut album Vulture Culture. A sub-label called Sound Boy has been launched too, resonsible for many singles and 10"s it has published the wonderful album Original Guerrilla Music by Junior Delgado.

On-U Sound has a rich program of releases for the year 2004, and many titles are in an ending phase in Adrian's new studio: a new album by Little Axe for Real World Records, called Champagne and Grits, new albums by Junior Delgado and African Head Charge for On-U, and Adrian Sherwood's second album, again for Real World/Virgin.

In the meanwhile the On-U Sound System dub live show keeps on refining, confirming itself as a show proposal extremely interesting for a transverse target. The show features dubmaster Adrian on the mixer, modulating and transforming sounds on real time, making the show unique and unrepeatable, and now he's back at the mixing desk with Tackhead.