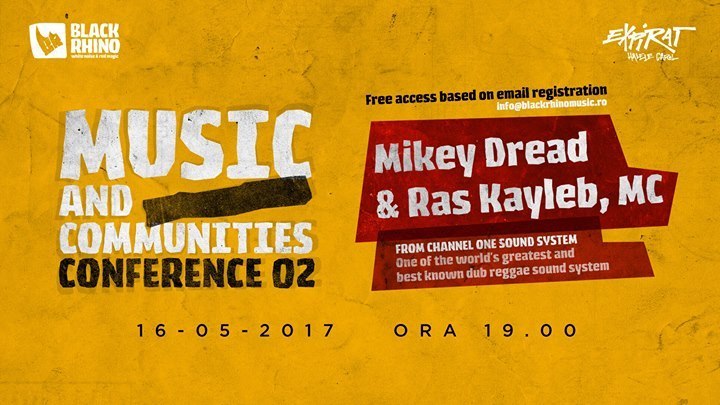 Black Rhino Music and Communities Conference #2 / 16th of May

Black Rhino Music continues the conference series dedicated to music and communities with special guests such as Mikey Dread and Ras Kayleb from Channel One Sound System.
For the second conference we push forward the discussion and bring in the perspective of two men who shaped an entire music scene and put their fingerprint on the evolution of sound system culture in London and United Kingdom. Discussion will front questions and answers about their first steps in creating a community around reggae music and how the scene developed under years. We will also target aspects such as their 30 years of presence in Notting Hill Carnival, Europe's biggest street festival.

By talking with Mikey Dread and Ras Kayleb we want to share with the public the drive behind the sound system culture and the philosophy that gathered such a strong and dynamic community around this culture.

The conference will be open to questions from the public all through the discussion.

To enter the conference please send us an email with your full name at info@blackrhinomusic.ro (only one person per email can be registered).

In 1979, Mikey Dread and his brother Jah T began to play at blues parties and local dances having spent many years under the watchful eye of their father, owner operator of the famous Admiral Bailey Sound. They chose the name Channel One in homage to the legendary Jamaican record label of the same name whose tunes featured heavily in those early selections. Inspired by Bob Marley’s belief in uniting people through reggae music, Mikey was keen to introduce new people to dub reggae music and started touring around universities, where he secured a solid fan base.
Channel One’s mission is to break down barriers via reggae music, they have achieved this by playing new venues, new festivals and different countries, taking their unique sound to Australia, New Zealand, Israel, Turkey and all over Europe. Channel One also celebrated 30 consecutive years at the Notting Hill Carnival making them one of the must see sound systems for attendees to Europe's biggest street festival.
2009 saw Channel One embark on their hugely successful national Dub to Dubstep Tour, with financial backing from the Arts Council, via Blackroutes and support from Punch and Vagabondz. Channel One took their sound system to 6 cities, touring alongside Kromestar, RSD and Jazzsteppa, showcasing their dub reggae sound system as part of the tangible heritage behind dubstep. In 2011, Channel One have been on another tour, this time Dub to Jungle alongside Congo Natty, Tenor Fly, Congo Dubz, Nanci and Phoebe and Klose One. And finally in 2012 Channel One went on a Jamaica Party tour, celebrating Jamaica’s 50th year of independence - alongside Coki, Mala, Shy FX, The Bug and Flowdan, Top Cat, The Heatwave, General Roots, RoxXxan, Rtkal and Screama. Finally Channel One have toured with the legendary Twinkle Brothers, a concept put together by Mikey Dread. These tours have been a great way for Channel One to reach new audiences.
Channel One Sound System's hand built custom speaker stacks provide a rich heavyweight bass sound which compliments their tight selection of old and new dub reggae classics, all played from a single vinyl deck and accented with echos and sirens. MC Ras Kayleb compliments Mikey's deep draws with Rastafarian chants and songs.