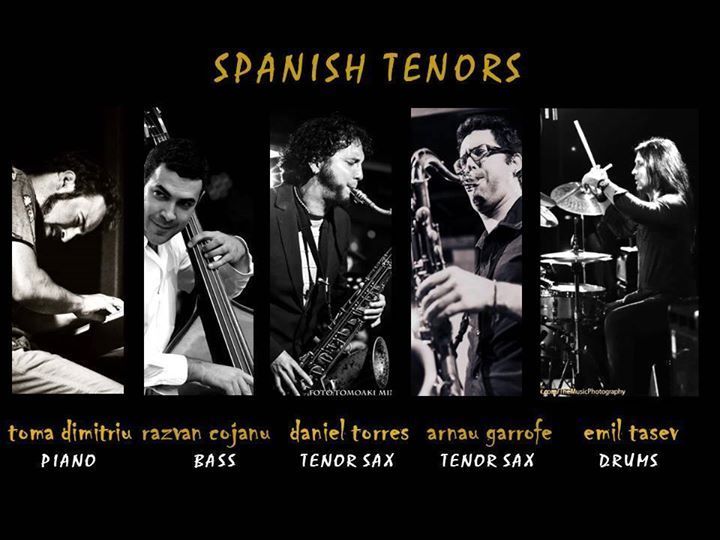 Daniel Torres - tenor sax (Esp)
Arnau Garrofe – tenor sax (Esp)
Toma Dumitriu – pian (Ro)
Razvan Cojanu – duble bas (Ro)
Emil Tasev – drums (Bg)
-----------------------------------------
The project is created by five young musicians coming from different parts of Europe (Spain,
Romania and Bulgaria). All of them have studied in the most prestigious conservatories in Europe (Groningen, Amsterdam and Den Haag - Holland). Their individual musical quality is consolidated and mature after many years of studying and performing around the world with their own projects. It is in Romania, in 2017, when they allfinally meet in various musical contexts and decide to start a new musical journey together.

This is the project’s debut tour. The material consists of original music written and arranged
by different members of the band and also some jazz standards arranged specifically for this
project. The music is manly rooted on the essence of straight ahead jazz, enriched by many
other musical elements coming from the different backgrounds that the members of the
group have. Giving their compatibility, similar musical education and maturity, the project
has an organic and solid sound (touch).

Drums, double bass, piano and two tenor saxophones is an unual set up nowadays. It seems
like a reminiscence from the old jazz days, when this type of formation was quite common.
The fact of having two saxophonists in the front line opens up many new musical possibilities and adds new "colors" to the music.

Musically, they all posses and manifest both the temperamental drive of youth and of thebackground from which they emerged and also the versatility in language and expression of the just-matured musicians. For the public, this will unfold into a powerfull musicalexperience, a night to remeber!

Born in Málaga (Spain). A jazz saxophone player rooted in the bebop language, influenced by avant garde and other different types of musics. He holds a Bachelor of music degree in “Saxophone Jazz Performance” from the “Prins Claus Conservatorium” (Groningen, Holland class of 2013, and a Master of music degree in the same field from the “Conservatorium van Amsterdam” 2016 (Amsterdam, Holland). He has also studied, as an exchange student, at "SUNY Purchase College" (Nex York) and "Humber College" (Toronto, Canada).

Since August 2016 he based in Bucharest, where he has been collaborating with the Romanian Radio Big Band as well as being involved in several musical projects.

Originally from Barcelona, Arnau Garrofé grew musically in the Netherlands. Finishing his jazz education in the Hague's Royal Conservatory (in Den Haag), class of 2011, and Rottedam Conservatory, he had the chance to play with great musicians, such as the ex- "Jazz Messenger”s Philip Harper, the late Kris Goessens, Erik Ineke and others.

He had been performing all over The Netherlands and Belgium. In 2014 Arnau Garrofe decides to expanded his musical threshold by travelling to Asia, looking for new inputs. There he had frequently played in the main clubs of Bangkok and Kuala Lumpur. Since 2016 he has been living in Sofia, where he quickly became one of the most sought after musicians of the jazz scene. He is known for his performances together with “Brass Association Big Band”, Hristo Yotsov´s “Jazz Cats”, the educational project “Jazztory” and the numerous
collaborations with Misho Yossifov.

Toma Dimitriu is a Romanian jazz piano player and composer. Born in 1993 in Bucharest, he received a classical piano instruction at the High School of Music "George Enescu”. In June 2017 he graduated from the Jazz Deparment at "Prins Claus Conservatoire", Groningen, Holland. Here he had the opportunity to study with notorious jazz piano players, like David Berkman, Spike Wilner, Kevin Hays, Marc van Roon, Rob van Bavel, Jasper Soffers etc.

He loves the sonorities and styles of traditional jazz. However, he approaches music in a new way by discovering -in a contemporary key- his own colours in jazz compositions and by his openness to free jazz. Some of these options can be found in his first CD, "The Pale Dot" recorded in 2015 - a project at two pianos performed with Mircea Tiberian. The album was successful among both Romanian listeners and music critics.

Toma Dimitriu is active on national and international scenes and festivals. He won numerous awards, such as "Jazz Composition Award" (2012, Bucharest), "The confirmation of the Year", Romanian Jazz Awards (2011), "Grand Prize" with New Wave Student Trio in Jazz Gala (Sibiu, Romania); "Best Individual Performance" - International Jazz Festival for Students (2011 - Targu Mures); "Berklee / Umbria Jazz Clinics" Award (2010, Perugia), etc. On April 3, 2016, he was the youngest and the only Romanian interpreter at "Jazz in Church" Festival, Bucharest. Along with the Spanish saxophonist Daniel Torres, he presented the audience with a musical project that includes original compositions of both musicians.

Răzvan Cojanu is a Romanian bass player and composer born in Ploieşti. He began studying music at the age of 7 at the “Carmen Sylva” Art High School in Ploieşti. In 2003 he was admitted to the Jazz section of the National Music University, Bucharest. He has been studying jazz under some great musicians, such as Mircea Tiberian, Decebal Badila, Joris Teepe.

He is involved in projects with prestigious musicians like Cristian Soleanu, Nicolas Simion, Rick Condit, Tom Smith, Alan Jones, Alex Harding and so on. He is invited to be the bass player in “Petrica Andrei Trio” – the trio of the amazing jazz piano player Petrica Andrei. His contribution can be heard on the album they recorded together in 2012, “Dedicated Waltz”. Razvan Cojanu is one of the most sought after jazz bassists in the country.

Emil was born in 1975 in Sofia, Bulgaria. He graduated drums and percussion from National Musical Academy in Sofia, Bulgaria in 2000. He has been invoved in various studio and live projects. Emil has wide range experiance in playing musical styles - varying from traditional jazz to fussion to latin to rock and classical music. His first studio record was when he was 15. Then he began touring with a number of different bands around Europe and has appeared on jazz festivals like "Montreux Jazz festival" in Switzerland. In addition he has played a number of times at the most prominent jazz festival in Bulgaria - "Bansko Jazz Festival". Emil has played with Steve Hamilton – a jazz pianist who has worked with legendary drummers like Billy Cobham and Bill Bruford.
Right now he teaches drums and percussion in Sofia and is active in playing at jazz clubs, live and studio.