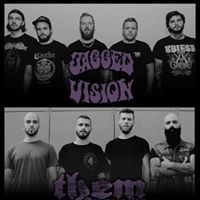 Rising from the west coast of Norway comes Jagged Vision. Embracing the rawness of 90s hardcore and combining it with the heavy riffing of stoner rock, Jagged Vision has set out to destroy. Since their start in 2010, there has been no genre limitations, no rules, and no boundaries. Jagged Vision is a product of raw heavy emotion which is what they try to communicate through their songs and live performances. Their debut album Harvest Earth was recorded at The Jam Room Recording Studio in Columbia, S.C. and was produced by Kylesa’s Phillip Cope. Harvest Earth is Retro Futurist’s second release, slated to come out in February, 2014.
Sharing stage with bands like Kvelertak, Purified in Blood, Orange Goblin and many more, Jagged Vision was named “a band to watch” by Metal hammer Norway, and “band of the week on one of Norway’s bigger radio stations, NRK P3.

“Them Frequencies is a four-piece chaotic / sludge hardcore band born in Bulgaria. The band put their start in 2010. Since then Them Frequencies released two set-to-destroy albums - late October, 2012 the band recorded their debut called “The great wave-off” at Next Dog Studio, Bucharest, Romania. July, 2014 Them Frequencies recorded their second album again with Marius Costache. Since their start the band is actively touring sharing the stage with bands like Kylesa, At The Gates, Terror, Eyehategod, Cancer Bats, Black Tusk and many more. Them Frequencies is a band that does not fit in a specific genre combing raw and fast metallic hardcore fury, slow grind-blues riffs, sludgy vibe, dark, heavy and chaotic atmosphere, time signature warpings - all stick tight and co-exist together, fast and compact, ready to melt the brain.”

Drop Out Of Life: