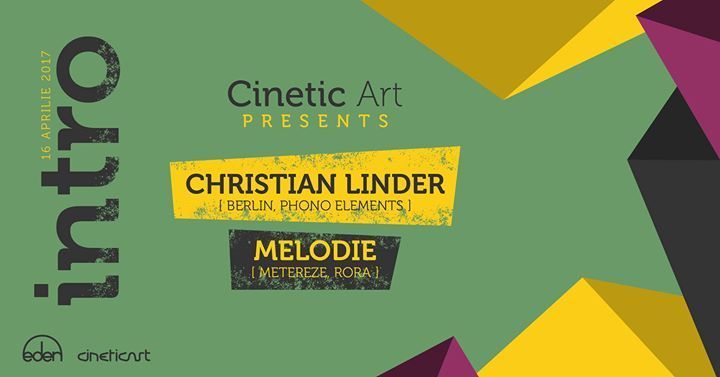 Cinetic Art presents INTRO
Just as one can compose colors or forms, so one can compose motions. For music is an edifice in motion, all the parts of which have to be sensed simultaneously, it is a spiritual drive of the soul. Cinetic Art is the way we move, stimulated by music. INTRO will show how energy is created within and released in movement.

Our Guest, Christian Linder, is coming from Berlin. He started back in the old days with early Chicago- and Italo House and started to produce his own music when most of us where just kids, in 1992. He began to travel to Clubs and Raves all over Germany , followed by appearances all over Europe and apparently places like Canada and Russia. His tracks have been played by many of the big name DJ's over the years, from Ricardo Villlalobos to Josh Wink, Dave Seaman to John Digweed, Zip, Priku and Raresh.
Nowadays he is working mostly as a Sound-Designer for Film & TV , but still carefully selecting his records from his extended record collection to make a mixture of all the styles gathered during the last 25 years, quite deep down and not too fast.
Easter Day comes with the opportunity to see him live for the first time in Bucharest!

Our Local hero, Melodie, has been producing for over ten years and values DJing and studio competence very highly. He carefully selects his records and plays them with precision and excitement. The tracks he released in the last year have greatly influenced the local and the international scene. He has a synaesthetic way of giving colour to a musical trip through his records.

Music has its unique way of establishing new and more interactive relationships with the listeners and that’s what INTRO is all about.

°Party starts at midnight !
°We reserve the right to select our guests!
°Only age over 18 allowed!