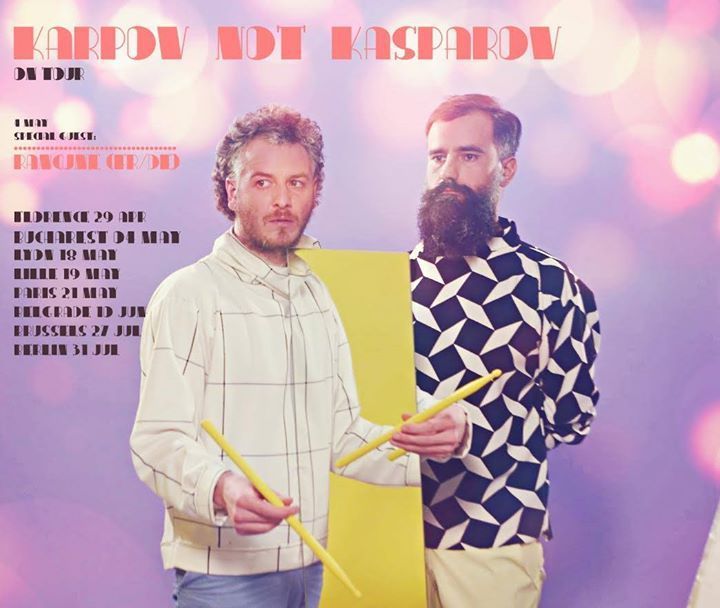 The duo began making music based on the rules and strategies of chess. It might seem complicated but the output is always a very danceable tune, sometimes with jazzy flavours, sometimes inspired by Oriental folklore (because chess is an Oriental game) but always mixed with powerful 80's dance-floor sounds. And wait! There's more to it than just the music. You might also see at their gigs ballet dancers or maybe some sort of theatrical performance, sometimes chess games played by the audience and other times the musicians play a live score for obscure silent films.

Debut LP "Soundtrack for a Game of Chess" has been nominated 'album of the month' by Vice Magazine, declared ‘one of the most valuable releases of the year’ by Radio Romania Cultural and Radio Europa Libera and aired online on New York radio WFMU. In 2015 this LP was pressed on vinyl at the boutique label PolychromeSounds (Berlin).

The Vocal Edits (2016) is the band’s most dancefloor-friendly album up to date. The album was featured on Tsugi.fr magazine, declared Best Romanian Electronic Release of 2016 by Scena9.ro and stamped "probably the best Romanian album of its genre in the last 30 years" by the jurnalists of musical blog Muzici&Faze.

++++++++++++++++++++++++++++++++++++
Rancune - treads the line between 80s-inspired electronic sounds and new-wave songwriting. Influenced by garage rock, electronic body music and most things in between, these three French guys living in Berlin can't choose between singing in their mother tongue, English or German. Playing with an assemblage of analog synthesizers, drum machines, plus an organ and a guitar amp, the three members take turns to sing songs of love, lust, grudge and culinary frustration. After forming in mid-2014, they started playing live in 2015 and have been recording demos to document their new-found sound and becoming imbedded in the Berlin music scene in the process.