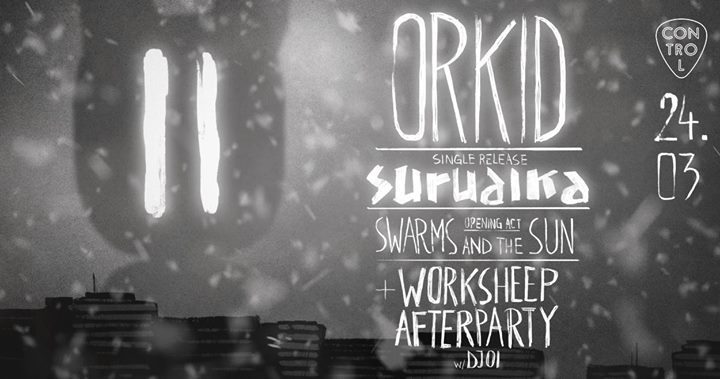 The greatest party we ever planned, to mark the finish line for the 10th Animation Worksheep.
We open the night by presenting the products of the Worksheep, that will include our latest misdeed, a short documentary on Bucharest Street Art, but also the music videos we made for bands like Subcarpați, Robin and the Backstabbers, Coma and others.

The night will continue with the first Bucharest gig of Swarms And The Sun, a one-man dream pop/alt/post-rock project from Transylvania. The first album, Longings, recorded in a bedroom, was realeased in July, last year and it is available here:
https://swarmsandthesun.bandcamp.com/releases.
Songs about loving, leaving, longing. Also our personal most pleasing musical discovery of the last year.

After that, the angry shoegazers of Orkid will take over the stage.
A very special gig to celebrate the release of the first single from the instrumental EP which will be available later on this spring. 'SURUAIKA' will also be the name of the short animated film produced by the Worksheep with the help of some amazing former Worksheepers, with a soundtrack composed and performed by Orkid. A post-dirge, post-shoegaze, instrumental piece put together by the four post-traumatic bluesmen.

DJOI is the in-house music project of Anim'est & Animation Worksheep that will guide you through 60 years of dance music. From rock'n'roll, blues, R'n'B & synth pop to progressive house, indie electronic, experimental techno and many other grooves.
DJOI = Filip Mănișor, Andrei Tănase, Radu Pop & Vlad Ilicevici and it was founded in 2014. It is also the root project for what later on became the first Orkid line up (Vlad, Andrei & Radu).