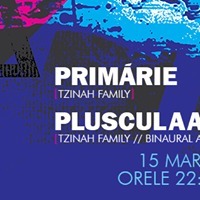 It is pretty hard to tag Primărie's house & techno sound given his abilities to translate various influences, from his romanian roots to his years as a berliner. It's even harder to describe in words the positive vibe flooding the crowd at any of Primărie's gigs. Playing delicious marathons at Bucharest's infamous afterparties. Presenting his groovy sound of house & techno in packed clubs hidden somewhere on Netherland's hidden canals. Inducing smiles on Berlin's undergound dancefloors. Or just making the crowd sweat its brains off in London! Primărie's sound is pretty hard to label yet powerful enough to make a statement on its own.
Constantly searching for the perfect groove, Primărie managed to capture the hype around the romanian electronic wave into his own label: Tzinah Records. No artistic bullshit, no experiments: just tunes covering a huge teritorry between deep house and tech house, designed for the most pretentious dancefloors! Tzinah Records drew the big names attention from its first releases (Raresh, Livio & Roby or tINI ring a bell for you? :D);
And yeah, a good A&R makes not just an exciting dj but a better producer too. With a pretty cool list of remixes and V.A. appearances, Primărie is now morphing his energy into his own sounds, expected to be released anytime soon;
A founding member of Tzinah Family booking agency, Primărie will continue to gather electronic influences from as far as Lima, Peru to the Black Sea shores and present these in his truly mesmerizing sets for the single reason he's playing music: to make people dance!

Plusculaar was born in Rumania and got in touch with music and the clubscene at a young age. When he entered a club with his brother for the first time, he was suddenly impressed by it's atmosphere and already knew that music would be playing a big role in his life. He was looking for a reflection of himself in the music and after more nights spent in clubs with stunnung sets and deep moments, he felt that he had to learn playing to impress hiself. After a while he could already feel happy about having success in Amsterdam and Romania, playing DJ-Sets with Pack Osuna and Florian Meindl. These experiences showed him, that it all just had begun and that there was more to come. To impress his own spirit better, he started to produce music, and releases on vinyl Labels like Enough Music, Cardinal, Fluegel & Inwave followed. In 2014 Plusculaar founded his very own label, Binaural Arts, with tracks of artists he was impressed by. The music speaks for itself. One thing is sure, there is more to come and to expect by Plusculaar: his way just started and he is ready for this ride. We are looking forward to more good vibes, smiles and happiness delivered through his sound. Keep an eye out for that guy!