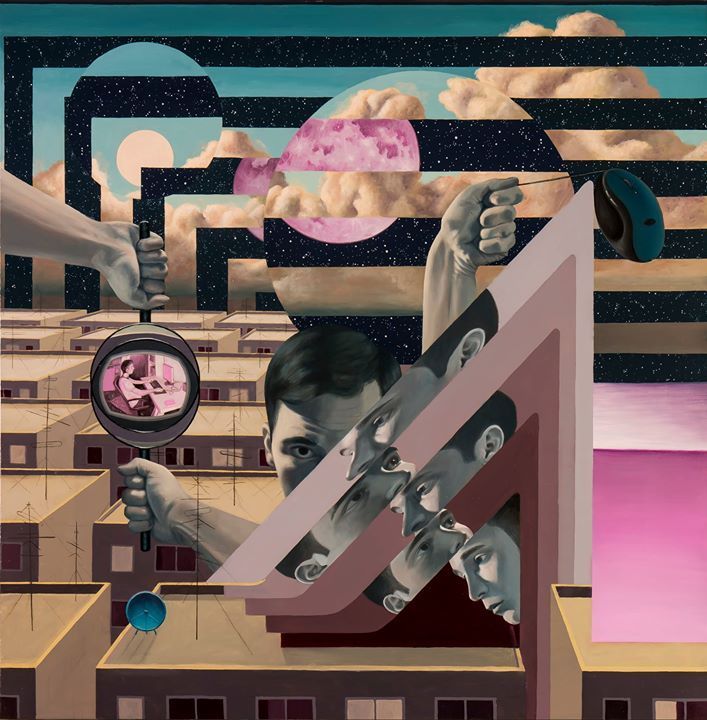 Victor Fota was born in 1989, he is from Bucharest, Romania. He’s a visual artist, graduate of Fine Arts High School “Nicolae Tonitza”, has a Bachelor and Master degree in Art History, department of Conservation and Restoration of Works of Art at the National University of Arts in Bucharest (2009-2014)
At the moment he lives and works in Bucharest and he’s focusing on experimenting with oil paintings which illustrate concepts and phenomena described by the scientific methods, combined with personal introspection. For his paintings he uses a clean technique which resembles the old Flemish method of rigid drawn forms and a successive glazes of oil paint on a very smooth surface.
His works are separated in three major concepts; “Two Grounds”, “Reality through Reason-Cosmogony” and “Human Extension”

The "Retroactive Mindscape" exhibition bring together a selection of works from all three concepts which have at their core the representation of the reality as seen and understood by the artist, filtered by his reason and composed on the canvas with pragmatism and meticulosity in a aesthetic mode. The works of Victor Fota illustrate the vision of a particular past period of his life. Retroactively ,the images displayed, resemble a past mindscape of his vision at that time on which the viewer can contemplate in the present. The first two concepts bring together a pedagogical vision of scientific theorems which are painted through the artist's vision and filtered out into a coherent representation of the particular phenomena.
The most recent series of oil paintings, have a concept based on the relation of man and machine, called “Human Extension”, in which the artist explores this relationship using facts and imagination, resulting in a surreal image that shows some effects of the symbiotic relationship of the human figure with a piece of technology. This relationship is put in a neutral light. Technology is shown as good and evil, and sometimes in a comical posture.