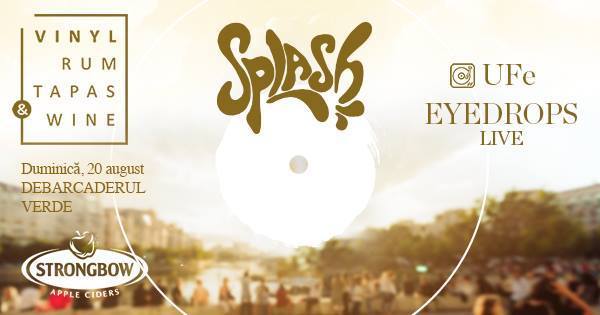 Get ready for some (more) play and join us as we float on #debarcaderulverde. This relaxing spot downtown will be home to our splashing tracks for the entire day. We’ve got some breezy shade, a magical sunset, a natural plants island and, as always, great vinyl spinning & live acts to get you along! #naturainvadeazaorasul #urbanbynature

// Guests, bring’em on! You are welcome to showcase your vinyl collection. Bring some records and hold them proud! //

Come to our oasis of jazz, soul, rock & roll, funk, world music, disco and much more. Have some wine. Bring your own records for showcasing. Be friendly. Meet fun people. Be your social self. This is what we’re all about!

Is a romanian alternative-indie rock band, based in Bucharest. The band started in 2012 by playing in english, but fully switched to romanian in 2014-2015, thus finding it’s own unique “voice” on the romanian alternative stage. Their latest singles, Prezent and Bicicleta have both found themselves heavily aired on all alternative-firendly FM and online radio stations, and Bicicleta has been chosen to feature Pepsi’s 2016 TV campaign. Also, the band opened for MUSE on the 29th of July 2016, in Bucharest. Their live set has been said to paradoxically generate a sort of energetic melancholia, and a feeling of angry acceptance. Most common topics found in their lyrics are social and spiritual, with and obsession on freedom and a constant struggle to stay present.

If you ask him about his love for music, UFe is a man of few words. But, then again, any artist speaks through his means of artistic expression.

In his case, UFe manifests himself as an explosion of diverse musical influences and genres that create a unique style which resists easy categorization. From the ancestral rhythms of Africa and the tropical sounds of Latin America, to the jazz and funk breaks that made the foundation of hip hop, plus some of the electronic music currently enjoying a vogue, many elements have helped shape his style into an admirably eclectic music.

He blends this vastly diversified repertoire into his own sound and expresses it into his own idiom with imaginative synthesis that makes the listening a vigorous and exciting experience.

UFe is also an accomplished producer, experiments with percussion and is currenly inloved in live projects such as Kosmic Blues and Groove Hug.