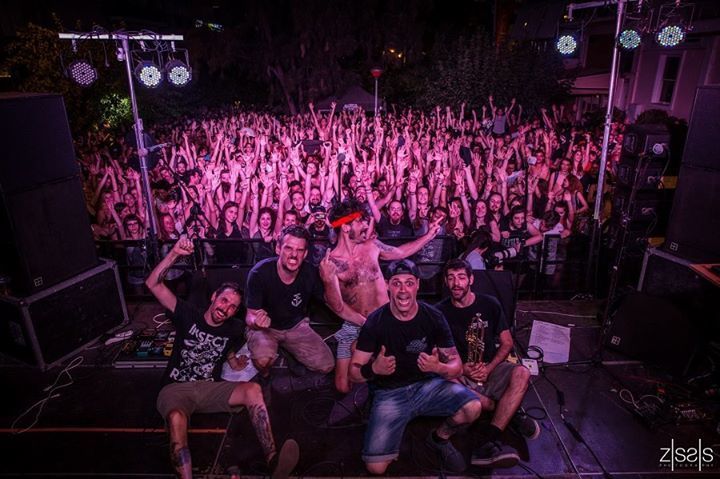 Vodka Juniors is a punk rock band born and raised in the basements of Athens, Greece, spreading madness and mayhem wherever they play.
In 2018 the so called cradle of democracy, also known as the crematorium of hopes and dreams, has given birth to the 7th Vodka Juniors studio album "Warrior Anthems", which will be brought to the Romanian audience by the tour that takes the band to Bucharest and Cluj.
The album musically blends punk music with electronic, dance and hip-hop sounds in an attempt to break all music boundaries and deliver an emotional bloodbath through words, sound and rhythm!

Vodka Juniors formed in 2000. Quickly the band ignited in the underground circles with albums like "Suburbancore", playing notorious punk rock shows in the legendary AN club in Athens while spreading all their music for free. Soon the band had to move to the biggest venues in town maintaining however the chaotic family atmosphere of the basement shows. In late 2007 the band released the critically acclaimed double acoustic/rock album titled "Dark Poetry" that quickly became a classic. The album signified the breakthrough of the greek underground scene that since then has risen to profound levels, demanding the attention of the whole world. In 2012 Vodka Juniors organized one of the most historic live shows in Athens when 3000 people stormed the center of the city to celebrate music. Without any interviews, no media sponsors, no standard promotional tricks, no production companies, no press/radio and 5 years without an album a band proved the power of music and the people cannot be contained and surely cannot be dictated by the conventional music industry standards. In the next years Vodka Juniors focused on writing their triple album "Clubriot", an attempt to break all music boundaries and give back all the love with new words, new sounds & new rhythms. The 45 track album was released in 2015 following a monster 3 month european tour spreading the madness in 18 countries for over 24.000 km. "Clubriot" is already becoming a classic. During the years the band has experimented a lot with music, played every single basement to big theater around the world in countless tours true to their hard work ethics.

Now they're back with "Warrior Anthems" and ready to tour the world. As the song goes "Addicted to the road, one thing I have come to know, I count my age with miles not years and I got thousands more to go..."

"...When everything's going wrong, everything around you seems like a movie you can't relate to, you feel tired of everything and you 're at the bottom of the shit and everyone keeps pushing you, there comes a moment of clarity in your mind that you pick up the guitar and write a song about it. Then it feels a bit better. Then you put out the record and people get the songs and then comes a time you're playing live and as you scream the words of that song there is a boy or a girl right in front of you that screams the same words as if it was his song. And then you realize you're not alone. Nothing can ever beat that feeling... We wish we could play everyday...“