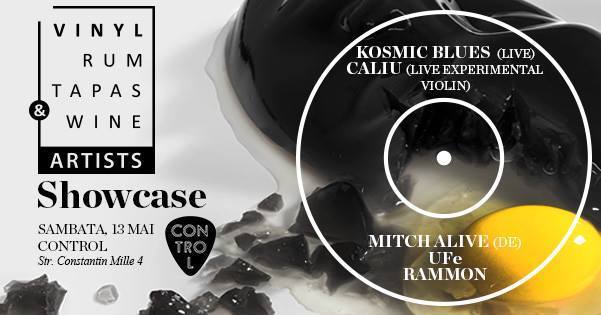 This is our first VRTW Artists Showcase.

We’ve spiced our basic mix of funky – dancy acts with moments of revelation and experimentation. Join us on this journey of musical discovery. Be prepared to never want to go back :)

vrtw.life
Vinyl, Rum, Tapas & Wine is an independent record label, booking agency and events platform. We are a family of artists driven by discovering and performing musical tales and creating authentic content.

Mitch Alive on the decks means you're going to have a party. He wants to see people dancing and he knows how to make it happen. The Wheels of Steel are both the orchestra and the goalmouth. With corner kicks and precise passing, artful flanking, deft dribbles, surprise throw-ins and spectacular bicycle kicks, Mitch brings a musical groove with him that brings the party alive.He is almost for 20 years in the business and played already in Beijing, Dubai, Moscow, London and almost the whole of Europe.
soundcloud.com/mitchalive

UFe manifests himself as an explosion of diverse musical influences and genres that create a unique style which resists easy categorization. From the ancestral rhythms of Africa and the tropical sounds of Latin America, to the jazz and funk breaks that made the foundation of hip hop, plus some of the electronic music currently enjoying a vogue, many elements have helped shape his style into an admirably eclectic music.
UFe is also an accomplished producer, experiments with percussion and is currenly inloved in live projects such as Kosmic Blues and Groove Club.

Caliu, known in Romania as the king of violin, is the representative figure of the iconic gypsy band Taraf de Haïdouks, and now performs with Taraf de Caliu. His strings went around the world through the band's international gypsy tours, but also in classical performances like the already famous one from the movie “Le Concert”.

Caliu's performances are mindblowing and there's no other way to better describe them. He has a way to get under your skin and he's an exceptional reader of people's mood, always adjusting his style accordingly. He can do entire shows on his own, with the gypsy band or even perform in fusion gigs alongside DJs.

Born from misunderstood beats of techno and coming from Constanta, Rammon has been taking sunbaths in the most exotic musical beaches for 12 years now.He is one of the co-founders of the already famous Berlin Club and of the super musical group Constanta Funk Collective. With such a diverse background, no wonder each of his sets is an overbalancing cocktail of disco, funk, blues, jazz, bossa nova and other styles of dance created with the flow!
www.mixcloud.com/RammonID//facebook.com/rammonberlincrew/

Kosmic Blues, as the name suggests, is a wonderful blend of blues, funk and electronic beats, with a dash of folk, jazz and old school rock. The result is a fresh timbre and a soothing sound that shelters the listener in an atmosphere of peace and "joie-de-vivre". Think of Morcheeba meets Jefferson Airplane, but with more than a modern twist.
The band is formed by three people: Cosmina with her angelic voice, Acoustic Paul and his amazing guitar, and Robert a.k.a. UFe providing soulful beats with his MPC and gentle scratches on the turntables.
Their first single, Little sparrow, entered soon after its launch in heavy rotation at RADIO GUERRILLA.